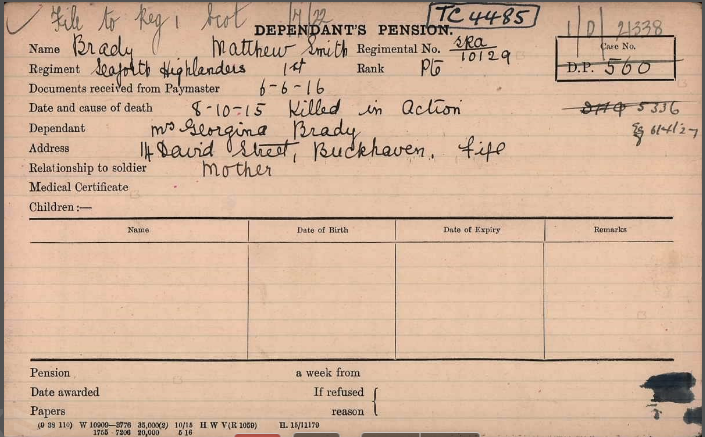 Mr Terence Brady, Buckhaven, has been notified by the War Office that his son Private Matthew Brady, 1st Seaforth Highlanders was killed in action on the 8th Oct, in France.  He was 25 years of age, and had previously served as a regular in the R.F.A.   Shortly after the outbreak of war he re-enlisted in the Royal Engineers, and was later transferred to the Seaforths.

Letters from comrades of Private Matthew S. Brady, 1st Seaforth Highlanders, tell that he had a sad fate while acting as sentry.  One of his friends was speaking to him a moment before, and turned to go further along the trench. A shell burst near, and returning to his friend, the soldier found that poor Matthew Brady had been struck with almost the full force of the explosion.  Private Brady was about 25 years of age, and was formerly in the R.F.A.  He was the son of Mr and Mrs Brady, David Street Buckhaven, and formerly of Dundee.

Can you tell us more about Matthew Smith Brady'? Some additional facts, a small story handed down through the family or perhaps a picture or an heirloom you can share online. Contact our curator...