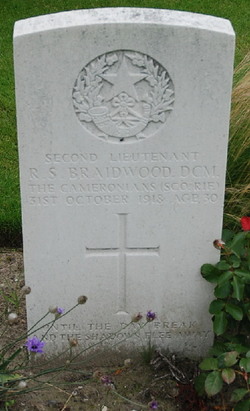 Second Lieutenant Robert Simpson Braidwood joined up on the first day of the war, serving with the Scottish Rifles in Gallipoli, Egypt, Palestine, and the Western Front, Belgium.

He was initially Company Quarter Master Sergeant, receving his commission around October 1917 whilst he was in the U.K. He returned to the Western Front in August 1918 as Second Lieutenant.

Braidwood was awarded the Distinguished Conduct Medal (D.C.M) in Egypt, 1916 but had previously been awarded the Serbian Cross with Swords in Gallipoli. His D.C.M. was awarded 14.11.1916 “For conspicuous gallantry in action. He kept his company supplied with ammunition and water under very heavy fire, displaying great courage and initiative”.

Lieut. Robert Simpson Braidwood, Scottish Rifles, who was killed in action on 31st Oct., was the last surviving son of Mrs Braidwood, 2 Stewart’s Terrace, Barnhill, Broughty Ferry.  Deceased answered his country’s call on the first day of the war, and during these past four years he has fought with distinction on many fronts.  He served with the Scottish Rifles in Gallipoli, Egypt, and Palestine.  During the Peninsula campaign he was awarded the Serbian (Silver) Star for a bombing expedition of singular daring, while in Egypt he was awarded the D.C.M. for bravery and devotion to duty.  Promotion came quickly to the gallant soldier, and he rose to the rank of quartermaster, while about a year ago he received his commission.  He rejoined his old regiment in France.  In civil life Lieut. Braidwood was a fire engineer with an extensive business in this district.

Can you tell us more about Robert Simpson Braidwood'? Some additional facts, a small story handed down through the family or perhaps a picture or an heirloom you can share online. Contact our curator...