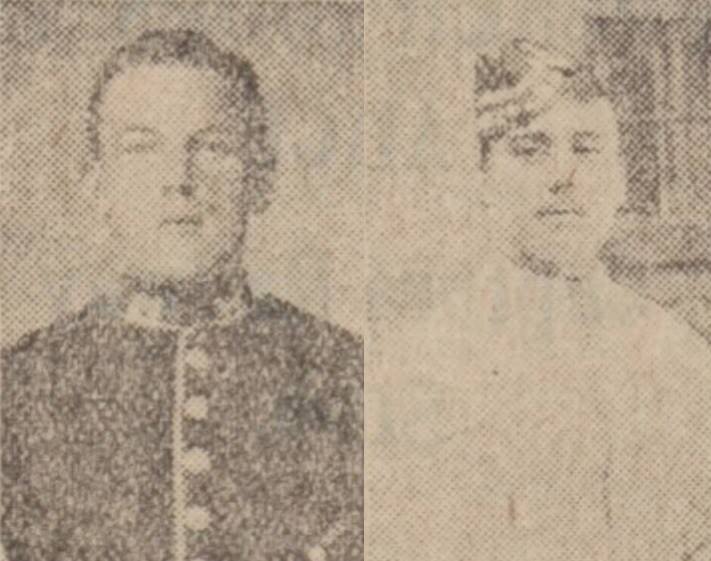 Alexander has no known grave but is remembered on the Menin Gate Memorial.

10651 Pte. Alexander Y. Brankin (left), 2nd Gordon Highlanders, was killed in action at Ypres on 29 October 1914.
Brankin was a pre-war regular soldier whose father has served in the Crimea and Indian Mutiny with the Connaught Rangers.
His four brothers were all in the army, Henry and Thomas with the Black Watch, and Andrew (right) and Edward with the Gordons. Pte. Andrew Brankin was badly wounded at the Aisne, and was home on furlough when news of his brother’s death reached Dundee.
Alexander Brankin is commemorated on the Ypres (Menin Gate) Memorial, West-Vlaanderen, Belgium.

DUNDEE GORDON WHO WAS KILLED IS HIGHLY PRAISED BY HIS CAPTAIN. A UNIQUE FAMILY RECORD. To the military record of the Brankin family, who reside at 61 Wilkie’s Lane, Dundee, it would be hard to find a parallel.
The late Mr Henry Brankin, who was a private in the 8th Connaught Rangers, was a Crimean and Mutiny veteran, and his five sons are following in his train. Andrew Brankin, who is in the 1st Battalion Gordon Highlanders, received two bullet wounds in the thigh and a shrapnel wound in the shoulder at the Aisne battle, and is at present home on sick furlough. Prior to the war he was a machineman in Blackness Foundry. Henry Brankin, jun., is with the 11th Battalion Black Watch; Thomas is with the 4th Battalion Black Watch (Territorials); and Edward is at the front with his regiment, the 1st Gordon Highlanders. Information has been received that Alexander has been killed in action.
Alexander, who was 26 years of age, has been serving in Egypt with the 2d Gordon Highlanders during the past seven years, and on the outbreak of hostilities was sent to the Continent, landing there early in October.
The news of his death was conveyed by deceased’s captain, who writes: – “I beg to tender you my heart-felt sympathy at the fate which has befallen Private A. Brankin, of my company. He was shot through both ears and killed instantaneously on 30th October, near Ghelnvelt [sic], in Belgium. I did not actually see him after he was killed, as I was myself hit in the foot next day, but I inquired at several men who saw him. He was a splendid boy, and we were very fond of each other, and had been congratulating one another on the narrow escapes the day before.” The Courier, Saturday, 12 December 1914, 4.

Can you tell us more about Alexander Young Brankin'? Some additional facts, a small story handed down through the family or perhaps a picture or an heirloom you can share online. Contact our curator...