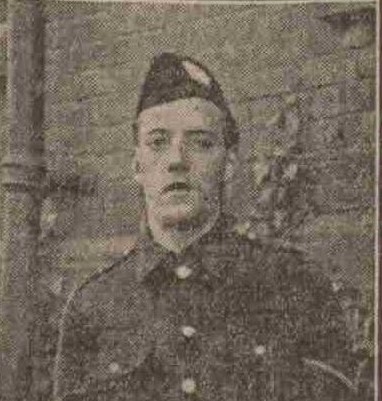 John has no known grave but is remembered on the Le Touret Memorial. He was the brother of Pte Stuart Brodie, 7747, Highland Light Infantry, who also served and returned home safely.

Intimation was yesterday received by his parents, who reside at 5 Brown Street, Dundee, of the death of Lance-Corporal John Brodie, of the 1st Cameron Highlanders.

The news of their sad loss has reached Mr and Mrs Brodie in a somewhat indirect way.  Until as late as 24th January last Lance-Corporal Brodie had been writing home from the front, but the sudden stoppage of communication led his parents to make inquiries as to his whereabouts. The result of these is that they have received from the Record Office at Perth a letter which states that information has reached that office of the death of Lance-Corporal Brodie.

The official intimation from the War Office, however, has not as yet come to hand.  Neither the place nor date of his death is mentioned in the message received from the Record Office.

Lance-Corporal Brodie, who had previous military experience in the Army Service Corps, joined Lochiel’s Cameron Highlanders on the outbreak of war.  A native of Edinburgh, he was about 20 years of age, and was formerly employed on the railway at Prestonpans.

Lance-Corporal Brodie belonged to a family with a unique military record.  His father, Sergeant Brodie, is at present mobilised with the Dundee National Reserve, and he had formerly served in the Argyll and Sutherland Highlanders.

Sergeant Brodie was also the son of a soldier.  He was born at Broughty Ferry Castle, where his father, an artilleryman, was stationed.  The grandfather of the young soldier whose death is now reported was a Crimean veteran, and in the Brodie family there has been three generations of soldiers.

Lance-Corporal Brodie was the elder of two sons, and his brother, Stuart Brodie, has joined the Highland Light Infantry.

Can you tell us more about John Brodie'? Some additional facts, a small story handed down through the family or perhaps a picture or an heirloom you can share online. Contact our curator...