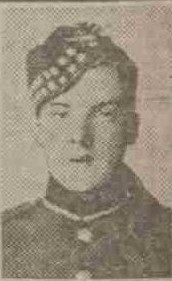 Charles has no known grave but is remembered on the Cambrai Memorial.

Mr and Mrs Chas. Brown, 118 Albert Street, Dundee, have been informed that their son, Private Charles Brown, Seaforth Highlanders, was killed in action on 21st November.  The sad news was conveyed in a letter from his captain, who stated that Private Brown was killed during an attack.  Deceased who was 19 years of age, enlisted in July, 1916, and had been in France only since September of this year.  Prior to joining up he was employed with Messrs Fleming & Barry, Camperdown Sawmills.  Mr and Mrs Brown have other two sons on active service.  Pte. George, Seaforth Highlanders, who has been three times wounded, is at present in Mesopotamia, and Private John, Black Watch, who has been four times wounded, is serving in France.

Can you tell us more about Charles Brown'? Some additional facts, a small story handed down through the family or perhaps a picture or an heirloom you can share online. Contact our curator...