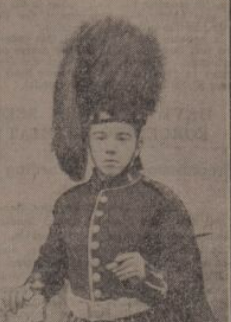 John has no known grave but is remembered on the La Ferte Memorial. He was the brother of Pte James Brown, 3044535, Pioneer Corps.

Killed in Battle of the Aisne.

Mrs Brown, 21 Lilybank Road, Dundee, to-day received intimation from the War Office that her eldest son, who was a member of the 3d Black Watch, was killed at the battle of the Aisne.  Twenty years of age, he joined the colours two years ago, and left for the Continent with the first contingent. Previous to joining the Black Watch he was employed in Boase Brothers’ Works in Kemback Street.  He has another brother, James, who has joined the Royal Scots, and is now with his regiment in France.

Can you tell us more about John Brown'? Some additional facts, a small story handed down through the family or perhaps a picture or an heirloom you can share online. Contact our curator...