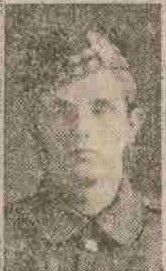 Thomas has no known grave but is remembered on the Thiepval Memorial.

Mrs Patrick Brown, who resides at 22 Hunter Street, Dundee, has been informed that her son, Private Thos. Reoch Brown, Royal Scots, has been killed in action.  Pte. Brown, who was 19 years of age, enlisted in October, 1915.  He had been at the front since July of this year, but had been posted as missing for some time back.  Prior to enlistment he was employed as an oiler in one of the public works in the city.  Mrs Brown has two sons still serving with the forces on active service.

Thomas is listed on GWD as Thomas Reoch Brown but his correct name according to service records and register of births is Thomas ROCHE Brown.   He was one of seven siblings having 4 brothers,  Patrick,  Daniel. James and Peter as well as 2  Sisters, Mary Jane Brown and Maggie Brown Torrance

It would seem from Thomas service record that he enlisted on 29 October 1915 and  went to South Camp in Ripon North Yorks for training with the 18th Bn R Scots on 3 Nov 1915.   After training he was posted to the BEF on 23 June 1916 where he was to join 17th Bn R Scots .  However, soon after landing in France and being sent to No 35 Inf Base Depot on 24 June  he was attached to the 8th Bn Kings Own Yorkshire Light Infantry from the 12 July 1916 and whilst serving with them he was Killed in Action  at just 19 years of age at Bazentin on the Somme on 25 July 1916

Whilst not an entirely unusual  set of circumstances it none the less resulted in some delay in the notification of his death as a casualty and it was not until the 3 November 1916 after enquiries from the family about a lack of communication from him that the official notification was made.  It seems that 17 Bn R Scots were unaware of his fate and OC 8 KOYLI was delayed in notifying his death

Can you tell us more about Thomas Roche Brown'? Some additional facts, a small story handed down through the family or perhaps a picture or an heirloom you can share online. Contact our curator...