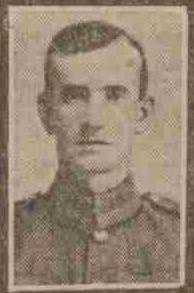 The name of Pte. David Bruce, Cameron Highlanders, has been added to the list of “Courier” employees who have fallen in the war.

Pte. Bruce, whose widow and family live at 24 King’s Road, Dundee, attested under the Derby scheme, and was called up over a year ago.  He had been for about nine months at the front.

In a letter from a comrade containing the intimation of his death, it was stated that deceased was well liked by the whole of his platoon.  He served his apprenticeship as a compositor with D. C. Thomson & Co., Ltd, Dundee, and being of a cheery disposition was well liked by all his fellow workmen.  He was 29 years of age.

Can you tell us more about David Bruce'? Some additional facts, a small story handed down through the family or perhaps a picture or an heirloom you can share online. Contact our curator...