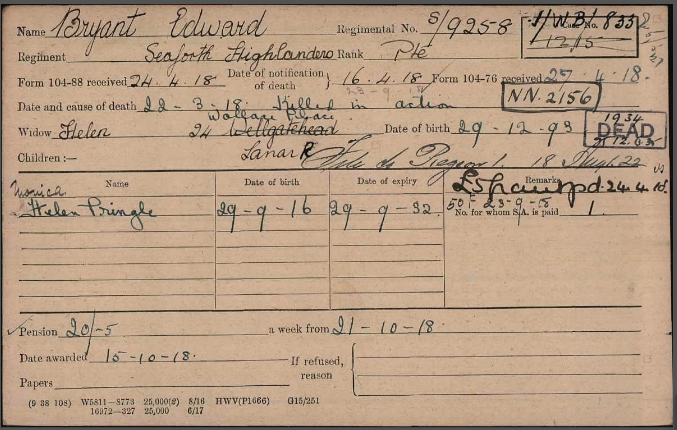 Edward has no known grave but is remembered on the Arras Memorial. Believed to be the brother of Pte William Bryant S/11569, 6th Battalion Cameron Highlanders, who was killed in action 26.09.1915.

Private Edward Bryant, Seaforth Highlanders, who had seen service in Mesopotamia, was a son of Mr G. Bryant, district manager of the Liverpool Victoria Legal Friendly Society, Commercial Street, Dundee.  He was formerly employed as a clerk in the Lanarkshire Middle Ward, Hamilton.  A brother William was killed at Loos while serving with the Camerons, and Ordinary Seaman Percy Bryant, Clyde Z/2616, who was at Gallipoli with the R.N.D., was discharged owing to wounds.

Can you tell us more about Edward Bryant'? Some additional facts, a small story handed down through the family or perhaps a picture or an heirloom you can share online. Contact our curator...