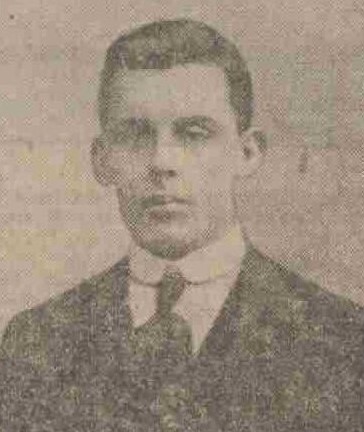 Another Dundee home has been plunged into grief by the startling intelligence of the death of Mr Andrew Buck, a bandsman in the Dundee Corps of the Royal Naval Volunteer Reserve, which has occurred in Deal Hospital.

Buck, who resided at 47 Lyon Street, took his departure from Dundee along with his corps some three or four weeks ago.  At that time he was not just feeling in the best of health, but he hailed with delight the prospect of taking his share in the defence for his King and country, and was amongst the first of the bandsmen to volunteer to accompany the Reserves.

Shortly after the corps reached their destination in the South of England, however, it was seen that he was far from well, and he was taken to a marine hospital in Deal.  Some days after his admission his illness was diagnosed as enteric fever.  Later he contracted bronchitis, and passed away on 21st inst.

Buck was a very popular and proficient bandsman and his funeral, which took place to Walmer Cemetery two days after his death, was attended by all his comrades in the Dundee Division of the Volunteer Reserve, and a representative from the Glasgow Corps.  The funeral was of a naval nature and the coffin, which was borne on a gun carriage drawn by a number of companions, was covered with the Union Jack and several floral tributes.

Deceased was barely 21 years of age, and deep sympathy is expressed for his sorrowing mother, who received a similar severe blow only a year ago, when her husband, Mr Charles Buck, who was employed in Messrs Stephen’s tannery, was brought home a corpse from his work.

Andrew was the oldest son, and a brighter, cheerier, and more obliging lad a mother could not have wished.

Andrew`s father, Charles, was a Leather dresser with Messrs Stephen`s tannery who died suddenly at work in 1913. The family lived at 47 Lyon Street and then 13 West Dock Street Dundee. Both Thomas and Joseph also served in the war.

Andrew was a volunteer bandsman who enlisted at the start of the war. He was unwell on his way to Camp at Betteshanger in Kent and diagnosed with enteric fever. He then contracted pneumonia and died in the Royal Marine Hospital in Deal.

Can you tell us more about Andrew Buck'? Some additional facts, a small story handed down through the family or perhaps a picture or an heirloom you can share online. Contact our curator...