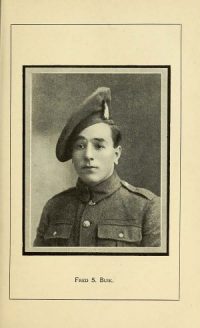 Fred commenced his compositor apprentice­ship on 18 November 1912. He had received his schooling in St. Salvador’s Episcopal School and in Stobswell Public School, and had worked for a short time as office boy with Baxter Bros. & Co., Ltd. He was a boy of good promise, of an attractive disposition, anxious to learn, and clever at his work.

Of an athletic temperament, Fred was keenly in­terested in football, cycling, swimming, and gymnastics, but of these he seemed to take the greatest pleasure in football. Even as a schoolboy he was one of the team which won the Dundee Public Schools Champion­ship in 1909, and later he played regularly for Dundee Violet FC, perhaps the premier junior club in the East of Scotland. When in France with the KOSB, Fred was honoured with a place in their eleven. He played in the 5th Division Championship, his team winning the medals.

Fred belonged to a large family of nine. His mother had the hope, after three of her boys, two of them married, had gone to the army, that Fred would be left to her, to be the mainstay of the home in days to come. But as time rolled on, and as the skies seemed to be ever growing darker for home and country, Fred anticipated the passing of the Military Service Act, and on 1 November 1915 he enlisted voluntarily in the Fife and Forfar Yeomanry. For a fortnight he was quartered at Kirkcaldy, then he was transferred to Bungay, in Suffolk.

The high-spirited boy did not take kindly to army ways. Ready as he was to submit to all orders which were based on reasonableness and justice, he could ill brook some of the arbitrary commands of military life. At one period in his training he happened to be under a riding master who, by his autocratic manner, made himself much disliked by his troop. Fred some­how fell into disfavour with this man, and one day the latter went so far as to strike Fred across the back with his whip. Regardless of consequences, the boy turned upon his officer and knocked him down. Fred was at once arrested and lodged in the guardroom. The colonel held an inquiry into the case, and it stands to his honour that he censured the officer for his tyrannical manners, and acquitted the boy with a caution to be more amenable to discipline in future.

In the autumn of 1916, having been transferred to the KOSB, Fred was sent over to France. There he must have seen much of the horror of actual warfare, for he was in many engagements, although he never wrote about them. If ever his spirit had been touched by the glamour of military pride and glory, now assuredly his whole heart was in revolt against the path he was compelled to tread. His mother sometimes used to upbraid her boy because his letters were so few and so uninteresting, but how could he speak to his mother of the scenes amongst which his days and nights were spent?

In January 1917 he had a respite from the battle­field through being sent to hospital with frostbitten feet – first to Boulogne, and then, at the end of the month, to England.

Fred recovered, and at the end of May he reported at the depot of the KOSB at Duddingston, near Edinburgh. Then by the middle of June he left with a draft for France, and again he took his stand on the field of battle.

On 17 October 1918, Fred sent home a postcard saying that he is well. Then there followed a great silence, which was broken only when his mother received the fatal news.

Fred was killed in action on 20 October 1918, age 21, and is buried in Caudry British Cemetery.

His Commanding Officer wrote on 11 November 1918:

I regret to inform you that Private Buik was killed in action in an entirely successful attack which this battalion, in conjunction with others, made on the night of the 20-21 October last about six miles N.E. of Caudry, near Cambrai. The attack was against a strong position. He was acting as Company stretcher-bearer, and did most excellent and gallant work. If he had lived our Medical Officer was going to have recommended him for a Military Medal. He was killed instantaneously by a shell, and, the day after the battle, was brought to Caudry and buried the following day by the Rev. Hall, Chaplain to the Forces, in Caudry Cemetery. He has a good wooden cross over the grave, with his name, regimental number, and date he died on it.

Can you tell us more about Frederick Strachan Buik'? Some additional facts, a small story handed down through the family or perhaps a picture or an heirloom you can share online. Contact our curator...