We need you to tell us more about the life and times of John M. Burnett 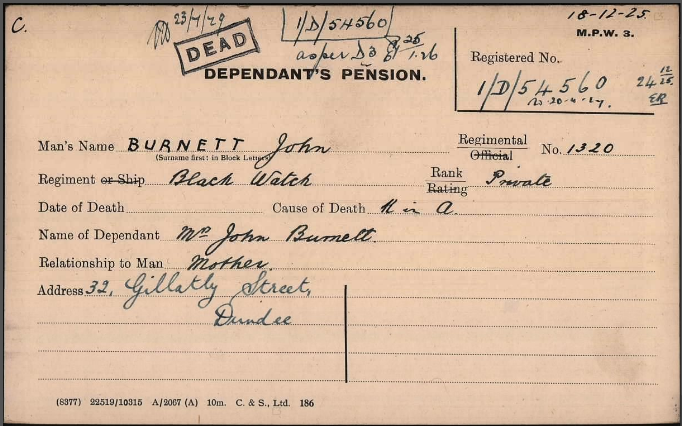 Private Burnett was a son of Detective John Burnett, of the Dundee Police Force.  The announcement of his death was received in a letter from the Rev. Andrew McFarlane, chaplain to the 2nd Battalion Black Watch, which stated that he was killed in the trenches by shrapnel fire on 5th November.  Two others were killed and several wounded at the same time.  “I can only send you,” writes Mr McFarlane, “my heartfelt sympathy with you in your very sad loss.  Your son was a smart, keen soldier, and his loss is much mourned by his company officers and by his many comrades in the battalion. His grave will be cared for as far as possible, and is marked by a wooden cross.”

Private Burnett, who was 26 years of age, had finished his service, but was retained in the regiment on account of the outbreak of war.  He had served practically all his time in India.  His elder brother Charles is in the Black  Watch, but before war was declared was despatched on special duty to Calcutta, where he contracted fever and was unable to accompany his regiment to the front.  Detective Burnett’s third son is a member of the Territorials.

Can you tell us more about John M. Burnett'? Some additional facts, a small story handed down through the family or perhaps a picture or an heirloom you can share online. Contact our curator...