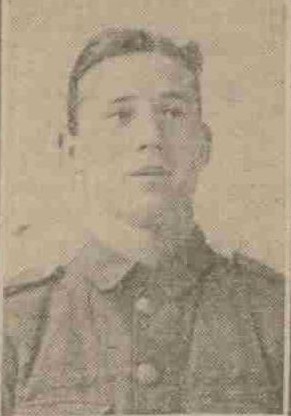 James has no known grave but is remembered on the Thiepval Memorial. He was the brother of Cpl William S. Burnett, 12th Battalion Highland Light Infantry, who was killed in action 25.09.1916 aged only 17 years old.

Two sons of Mrs Burnett, 25 Catherine Street, Dundee, have been killed in action.  News of the eldest son, Private James Burnett, Black Watch, was received during the week-end.  Deceased, who was nineteen years of age, enlisted at the outbreak of the war.  Early in 1915 he was sent out to the front, but, being under age, he was sent home after five weeks’ active service.  Private Burnett was again sent out to the front about eight weeks ago.

A comrade writing home, says :–“He died as a soldier should, with his face towards the enemy.”

Prior to enlistment Private Burnett was employed in the works of Malcolm Ogilvie & Co., Ltd., Dundee.

Official news has come to Mrs J. Burnett, who resides at 25 Catherine Street, that her son, Private James Burnett, Black Watch, has been killed in action.

Private Burnett, who was in his 20th year, enlisted in the Black Watch two years ago, and has been at the front for about two months.  Prior to enlistment he was employed as a millworker.  Another son of Mrs Burnett was killed in France a short time ago, and her husband is serving with the Fife and Forfar Yeomanry.

Can you tell us more about James Burnett'? Some additional facts, a small story handed down through the family or perhaps a picture or an heirloom you can share online. Contact our curator...