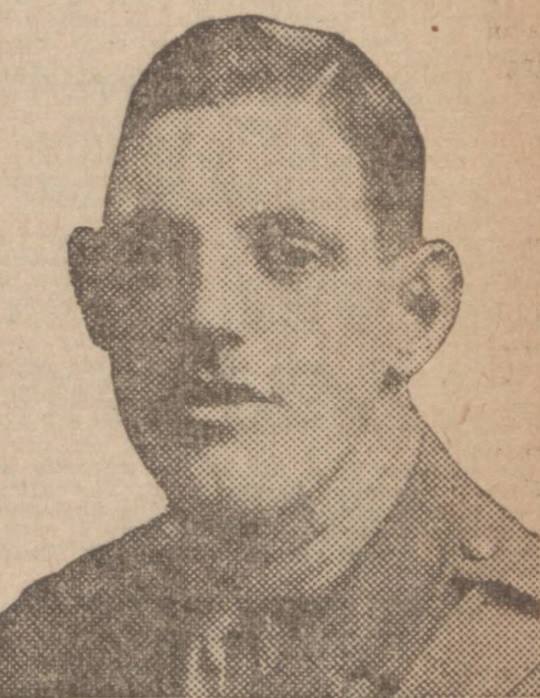 William has no known grave but is remembered on the Thiepval Memorial. He was the brother of Lt, George Alexander Burnett, 1st Battalion, Kings Royal Rifles.

Chief Petty Officer Burnett, whose home is at Ivybank, Nelson Street, Dundee, joined up as an ordinary seaman in September, 1914, and left with the Drake Battalion for Egypt in February of the following year.  He was shortly afterwards drafted to Gallipoli, where he served for about eight months.  During the heavy fighting of May 5, 1915, Chief Petty Officer Burnett was shot through the thigh and invalided to Malta, returning to the Peninsula, and subsequently taking part in the memorable evacuation.  He then saw several months service in France, taking part in the fighting at Beaucourt on November 14, when the R.N.D. boys did splendid work.  It was during this engagement that Chief Petty Officer Burnett won his laurels.  He rallied his men, and led them forward with great gallantry, although he had been previously wounded.

A former Harris Academy boy, “Bill” was well known in aquatic circles in the city as secretary of the Belmont Swimming Club.  Chief Petty Officer Burnett, who is at present in England training for a commission was previously assistant in the office of his father, Mr George Burnett, home factor, Victoria Road.  He is 23 years of age.  Mr Burnett’s eldest son, George Burnett, is a Lieutenant in the Army Service Corps.

Sub-Lieut. William Leslie Burnett, D.C.M., Drake Battalion, Royal Naval Division, was killed in action on 30 December 1917, aged 24.
Born 20 August 1893, he enlisted on 27 September 1914.
He was awarded the Distinguished Conduct Medal at the Battle of the Ancre, for conspicuous gallantry in action. He rallied his men & led them forward with great gallantry, although he had been previously wounded. Later, he remained out all night with a covering party under heavy fire.
Educated at Harris Academy, Sub-Lieut. Burnett is commemorated on the Thiepval Memorial, Somme, France.
The following accounts were forwarded to his father, George Burnett, 12 Nelson Street, Dundee.

GALLANT DUNDEE OFFICER KILLED IN ACTION. The sad intelligence has been received by Mr George Burnett, house factor, Ivybank, Nelson Street, Dundee, that his son, Sub-Lieutenant William L. Burnett, Royal Naval Division, has been killed in action. The deceased officer enlisted as an ordinary seaman in September, 1914, and had served in Egypt, Gallipoli, and France.
He took part in the fighting at Beaucourt, and it was in that engagement that he rallied his men and led them forward with great gallantry although he had been wounded, for which act he was awarded the D.C.M.
Sub-Lieutenant Burnett, who was 24 years of age, was educated at the Harris Academy, and was well known in aquatic circles in the city as secretary of the Belmont Swimming Club. Prior to joining up he was employed in his father’s office in Victoria Road. The Courier, Monday, 7 January 1918, 3.

GLOWING TRIBUTES TO DUNDEE OFFICER WHO “DIED AT THE HEAD OF HIS MEN.” Splendid tributes to the late Sub-Lieutenant Wm. Leslie Burnett, of the Royal Naval Division, who fell in action on December 30, are contained in letters from brother-officers which have been received by his father, Mr George Burnett, property agent, 12 Nelson Street, Dundee.
Commander H. N. Pollock, R.N.V.R., states that Lieutenant Burnett died at the head of his men fighting most gallantly, as everyone who knew him would expect of him. “I cannot tell you how sorry I am,” says Commander Pollock, “that such a magnificent fellow should be lost to you, to us, and to his country. He was the very embodiment of what an officer should be – good at work, good at games, always cheerful under all circumstances, and beloved by both officers and men. Since he came out to us this last time I had been looking forward to his being in command of a company before long, and I felt that in his hands it would have been equal to any in the British Army. He was so thorough and so keen, and it was due to the splendid spirit instilled in the men by such as he that the battalion added to their fine record that day by holding all the important portions of their positions against fearful odds and inflicting very severe casualties on the enemy. But it could not be done without its price on our side, and you, with others have lost as fine an example of a British soldier and man as I have ever seen.”
From a letter by Commander Gordon W. Whittaker, R.N.D., the following is an excerpt – “It is his wonderful cheerfulness and the confidence with which he inspired everybody which we will miss most of all. It was impossible to be afraid when Burnett was about; that seemed to be everybody’s feeling. I think it was that and his fine gentlemanly instinct of thinking for others that made the men and his fellow-officers love him as they did.” The Courier, Saturday, 19 January 1918, 3.

Can you tell us more about William Leslie Burnett'? Some additional facts, a small story handed down through the family or perhaps a picture or an heirloom you can share online. Contact our curator...