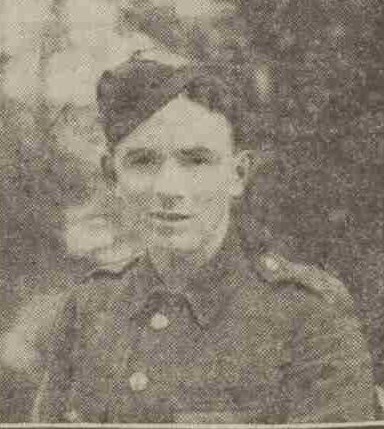 Two months ago Private Burns passed through his first experience of warfare, and on the memorable 9th inst. he was wounded.  He was removed to hospital, but his injuries were so severe that he passed away.  The news was contained in the following letter to his parents from Private Brown :–

“To my great sorrow I write to tell you that Jim passed away without recovering consciousness when on the way to hospital.  I got the official intimation from my officer yesterday, and I am writing to you at the first opportunity to offer my sincere sympathy to you all in your great sorrow.  During the past two years there has scarcely been an hour that we have been separate, and he was my pal—the best pal any man ever had.  Wherever he went he made friends, and no one knew Jim that did not love him.  He received his wound in one of the greatest battles in the history of the world, giving his life for his King and country, and I know that his motives were of the highest.

“I understand that he was taken to Bethune, where he and I have spent many a happy hour.  I am in the front line of trenches, but at a different part of the line, and there is no opportunity of making any inquiries at present as to where his grave is, but I hope to get full particulars when we move back.  All the men of this platoon have asked me to convey to Mrs Burns and your self their sympathy in your great loss.”

Private Burns was 22 years of age, and was in London for two years.  He was a keen and skilful golfer, and was an enthusiastic member of the Scotscraig Club, Tayport.

Can you tell us more about James Burns'? Some additional facts, a small story handed down through the family or perhaps a picture or an heirloom you can share online. Contact our curator...