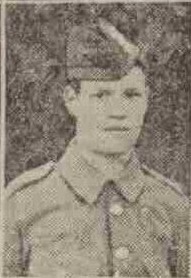 In a letter, which his mother, who resides at 60 North William Street, received on the 6th inst., the young soldier stated that he was doing well, and asked her to send him some “fags.”  The letter was posted on 25th September.

Private Callander was never to receive the cigarettes.  His mother received intimation yesterday that he died from wounds at Vendrenes on 3rd inst.

Deceased was only 18 years of age.  He had previous service with the Militia, and joined the 3rd Black Watch on the outbreak of hostilities.

Previous to joining the colours for the second time, he was employed as a carter with Mr David Horsburgh, contractor.  Only a few months ago Private Callander had a narrow escape from death.  He was leading his horse through the level crossing at Broughty Ferry, and was almost beyond the gates when an express train suddenly crashed into the rear of the cart, smashing it to splinters.  On that occasion he escaped without injury.

Can you tell us more about David Callander'? Some additional facts, a small story handed down through the family or perhaps a picture or an heirloom you can share online. Contact our curator...