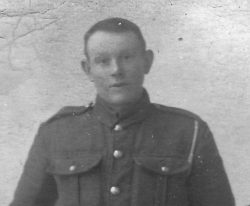 Colin Cameron served in the 3rd Bn. Scots Guards until he was transferred to the 1st Bn in March 1917. He survived the war. After his return, Cameron and his family  moved to Australia where he died on 8th August 1946.

Can you tell us more about Colin Cameron'? Some additional facts, a small story handed down through the family or perhaps a picture or an heirloom you can share online. Contact our curator...