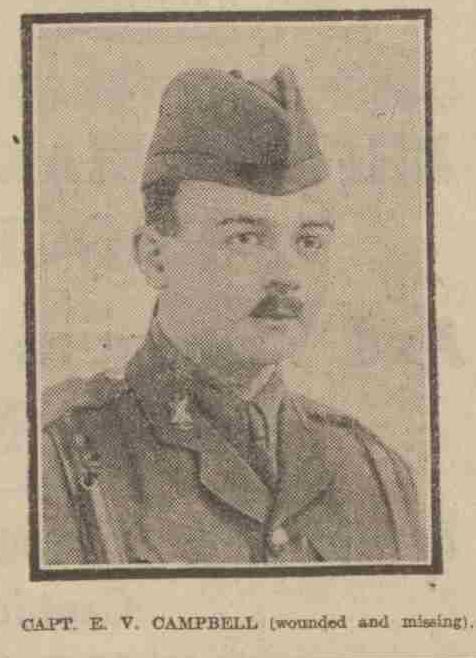 Ernest has no known grave but is remembered on the Loos Memorial.

Dr Alexander Campbell, Dundee has received a letter from Dr Rogers stating that his son Captain Ernest V. Campbell, was wounded on Saturday morning. He was seen about half-past ten by one of the other officers lying severely wounded on the battlefield, and it is calculated that he was wounded about four hours earlier—before six o’clock in the morning.  On Saturday night Dr Rogers and a party of orderlies and stretcher-bearers were over the ground and made a thorough search, but they failed to get any trace of the missing officer.  Dr Rogers added that another search was to be made on Sunday night.

In the case of Captain Ernest V. Campbell little hope is entertained, and from information which has now reached his relatives it appears that the gallant officer himself held out no hope of recovering from his wound.

Get On With the Fight.

Captain Campbell when last seen was lying in a shell-hole wounded, and his reply to one of the men who volunteered assistance is only typical of the fearless spirit and dauntless courage with which he led his men into action.  “Don’t trouble about me,” he said as he refused the proffered aid; “get on with the fight.”  On the three succeeding nights a careful search was made for the missing officer, but without success.  Major Rogers expresses the hope that he has been taken a prisoner.  “It is only a small chance,” adds the doctor, “but it is there.”

Can you tell us more about Ernest Valentine Campbell'? Some additional facts, a small story handed down through the family or perhaps a picture or an heirloom you can share online. Contact our curator...