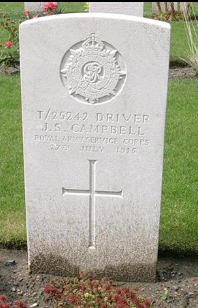 Driver James Scott Campbell (25242) has met his death while serving in Belgium as the result of an accident.  The official intimation states his death occurred on 27th July.  Deceased leaves a widow and two children, who reside at 21 Blackness Road.

IN RUNAWAY MISHAP AT THE FRONT.

Sad circumstances attended the death in France, as the result of an accident of Driver James Campbell, of the 6th Divisional Train Army Service Corps, who belonged to Dundee.  A widow and two young children survive him.

Mrs Campbell, who resides at 64 Blackness Road, Dundee, has received a letter from the Sergeant-Major of the company, who relates how Driver Campbell met his death.  He had been driving a pair of horses when they bolted and crashed into a tree.  Deceased was thrown from his lorry, and died shortly afterwards.

“I have been asked by the n.c.o’s and men,” continues the Sergeant-Major, “to express their deepest sympathy in your bereavement.  He was a good fellow, and popular with everyone, and we were all very sorry when we heard of the accident.

Twenty-five years of age, Driver Campbell was a Reservist, and was formerly employed in the city as a mason’s labourer.

Can you tell us more about James Scott Campbell'? Some additional facts, a small story handed down through the family or perhaps a picture or an heirloom you can share online. Contact our curator...