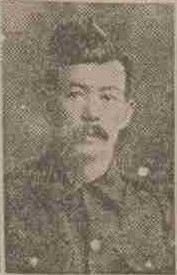 Official intimation has reached his wife, who resides at 1 Hunter Street, Dundee, of the death in action of Sergeant John Carberry, Black Watch.

When war broke out, Sergeant Carberry was in America, but he came over and enlisted in the Black Watch.  He is an old soldier, having seen twelve years’ service in India with the Black Watch.  In letters to the deceased’s wife both his Captain and his Colonel speak highly of his qualities as a soldier and as an efficient n.c.o.

Exactly twenty-six days have elapsed since Sergeant Carberry buried his wife’s brother in a French village.  He was 35 Years of age, and is the last of his family to fall in his country’s service.

Can you tell us more about John Carberry'? Some additional facts, a small story handed down through the family or perhaps a picture or an heirloom you can share online. Contact our curator...