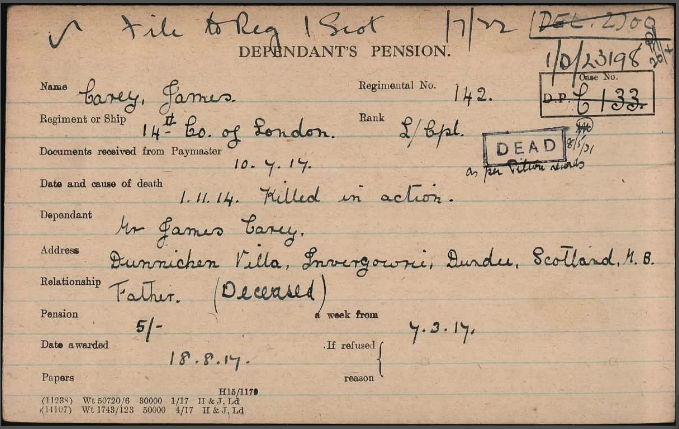 Mr James Carey, cabinetmaker, 65 Nethergate, Dundee, has been notified by the authorities that is son, Lance-Corporal Piper James Carey of the London Scottish, has been missing since the battle of Messines, in which, it will be remembered the crack Territorial unit gained rich laurels.

Lance-Corporal Carey, who was 32 years of age, was an architect in the employment of the London County Council, and had attained considerable eminence in his profession, when he was mobilised with his battalion in August.  He began his career in the office of the late Mr Robert Keith, architect, Dundee, and on completing the period of his indentures he entered the service of a Glasgow firm.  He had a hankering for a London experience, however, and about eight years ago he attained his desire by obtaining an appointment with the London County Council, in which he steadily worked himself up to a trusted position in the room of the chief architect under the Council.  He took a keen interest in all matters appertaining to the Scottish colony in the metropolis, and it was as the result of this interest that he joined the ranks of the London Scottish about six years ago.

In the Proceedings of the Institution of Civil Engineers for 1916 there appears a reference to the death in Flanders of a Dundee youth, Mr James Carey, who gave promise of rising eminence in the engineering profession.  He was born in Dundee on 21st May, 1883, and after fulfilling several minor engagements on various engineering works in the city and Glasgow he went to London and entered the service of the London County Council.  Under Mr W. E. Riley, M.Inst. C.E., he designed the Generating Station Buildings and other constructional works in London.  He was elected an Associate member of the Institution of Civil Engineers on 6th December 1910.  Mr Carey was a lance-corporal piper in the London Scottish, and went to the front with that regiment, sustaining wounds which resulted in his death.  He was a son of Mr James Carey, cabinetmaker, 30 Step Row, Dundee.

Can you tell us more about James Carey'? Some additional facts, a small story handed down through the family or perhaps a picture or an heirloom you can share online. Contact our curator...