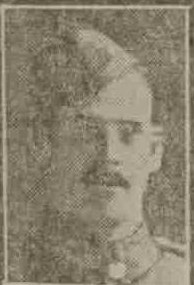 Official intimation has been received by Mr and Mrs Charles Carrie, 3 Smith Street, Dundee, that their son, Lance-Sergeant David Carrie, 8th Black Watch, was killed in action on 20th October last.  Sergeant Carrie was in his 25th Year, and joined up in 1916.  He was formerly a ploughman at the Barns of Claverhouse.  A stepbrother also in the Black Watch, is presumed to have been killed in action.

Can you tell us more about David Young Carrie'? Some additional facts, a small story handed down through the family or perhaps a picture or an heirloom you can share online. Contact our curator...