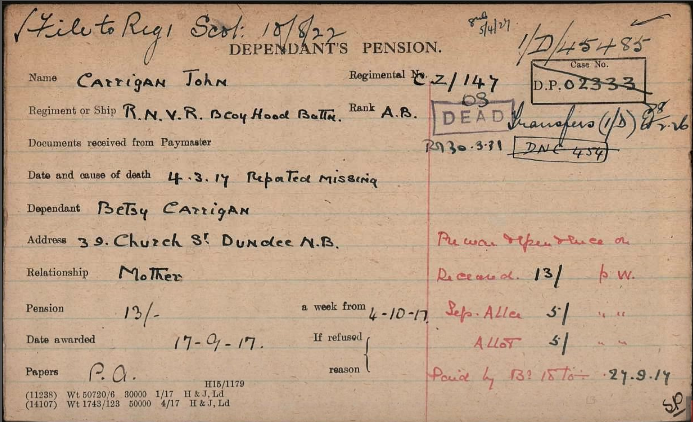 John has no known grave but is remembered on the Thiepval Memorial. His address is also recorded as 34 Dallfield Walk, Dundee.

A Dundee soldier has been awarded the Military Medal.  He is Petty Officer John Carrigan, R.N.D.  Petty Officer Carrigan, whose relatives reside at 39 Church Street, Dundee, was home on ten days leave some time ago, and had just returned to the front when he was informed that he had won the medal.  He was a reservist when called up at the outbreak of war, and saw service at Antwerp, the Dardanelles, and in the Balkans.  He is 23 years of age, and was formerly employed with Messrs Lawless & Hunt, plasterers.

John`s father, Matthew, was a mason`s labourer and his mother Betsy was a jute winder. The family lived at 6 Littlejohn Street, 34 Dallfield Walk and then 39 Church Street, Dundee.

John enlisted in the RNVR on the 15th February 1912.Following training at Blandford Camp in Dorset he fought at Antwerp and then in the Dardanelles, where he was wounded at the 2nd Battle of Krithia in May 1915. After his recovery in hospital in Cairo he rejoined Hood Battalion and fought in the Balkans, being made Petty Officer in October 1915. In May 1916 he went to France and fought at Beaucourt winning the Military Medal for “ bravery in the field during operations north of the Scarpe” in November 1916. His award was published in the London Gazette on the 19th February 1917. Earlier that month, on the 5th, he was posted missing in action, presumed dead during the assaults on Puisieux and River Trenches at Miraumont.

Can you tell us more about John Carrigan'? Some additional facts, a small story handed down through the family or perhaps a picture or an heirloom you can share online. Contact our curator...