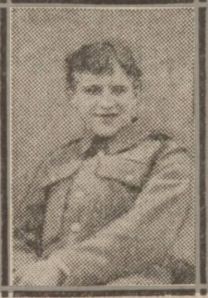 WOUNDED IN THE CHEST.

Private Patrick Carroll, Argyll and Southern Highlanders, whose parents reside at 10 Hean’s Lane, Dundee, lies in hospital at Exeter suffering from a gunshot wound in the chest.

He received his wound in the recent fierce fighting.  Two of his brothers are with the colours—one with the Army Service Corps and the other with the Black Watch.

DUNDEE SOLDIER KILLED BY MINE EXPLOSION.
Pte. Patrick Carroll, of the Argyll and Sutherland Highlanders, after a long spell of active service, has met his death as the result of the exploding of a mine.
Pte. Carroll, whose home is at 10 Hean’s Lane, Dundee, belonged to a soldiering family, and the father and two of deceased’s brothers are still serving. The father is in the Labour Section of the Royal Engineers, one of the brothers is in the Black Watch, and the other is in the Army Service Corps. Deceased, who was nineteen years of age, was wounded last year, but had returned to the front.
A letter has been received from deceased’s platoon officer, who says he cannot speak too highly of Pte. Carroll’s conduct all the time he had been in his platoon. He was ever ready to do his duty, and was always cheerful.
Dundee Courier 25 May 1916

Can you tell us more about Patrick Carroll'? Some additional facts, a small story handed down through the family or perhaps a picture or an heirloom you can share online. Contact our curator...