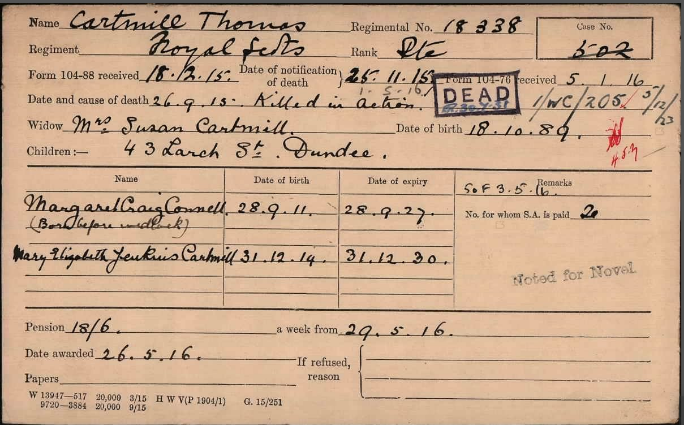 Thomas enlisted in to the Kitchener New Army Battalion of 13th Bn Royal Scots within 45 Bde of the 15th (Scottish) Division which was first blooded at The Battle of Loos and which was where Thomas met his fate on the second day of the Battle, on 26 Sept 1915

He was a married man to Susan and with two Children details of which can be seen on his Pension card.  Thomas was born at 12 Hospital Wynd Dundee on 12 Jan 1880 to parents Robert, a millworker and Jane.  Thomas married Susan at the age of 34 years on 21 December 1914 before his deployment to the Western Front

On the first day of Battle of Loos Thomas with 13th  Bn Royal Scots were in 45 Bde in 15 Div Reserve,  (44 and 46 Bde’s headed the initial assault on 25th Sept),  with 45 Div coming forward to reinforce the line and ready to resume attack on 26th when Thomas fell

When the battle resumed the following day, the Germans had recovered and improved their defensive positions. Much of the barbed wire, in some places 30 ft (9.1 m) deep, remained uncut and the British had used their stock of chlorine gas. British attempts to continue the advance with the reserves were repulsed. Twelve attacking battalions suffered 8,000 casualties out of 10,000 men in four hours. The British preparatory bombardment, which amounted to desultory fire for about twenty minutes apparently inflicted no casualties. German machine gunners reported being “nauseated” from the sight of so many corpses and ceased firing so that the British could retreat with their wounded.

Can you tell us more about Thomas Cartmill'? Some additional facts, a small story handed down through the family or perhaps a picture or an heirloom you can share online. Contact our curator...