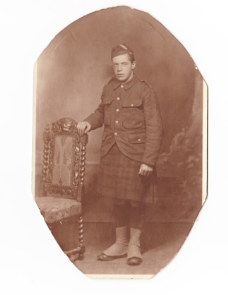 Mrs Casciani, 174 Overgate, Dundee, has been informed that her son, Private Joseph Casciani of the Black Watch, was killed in action in April.

The sad intelligence is contained in a letter written by a captain of his regiment, who writes :–“Your son was killed in action during an enemy attack in April.  He died for his country, and was buried with some of his comrades near the place where he died.”

Private Casciani enlisted in the Black Watch in June of last year.  He was 19 years of age, and was prior to enlistment employed as an oiler by Gilroy, Sons & Co, Limited, Tay Works, Dundee.  Deceased soldier’s father is serving in the Black Watch.

Can you tell us more about Joseph William Casciani'? Some additional facts, a small story handed down through the family or perhaps a picture or an heirloom you can share online. Contact our curator...