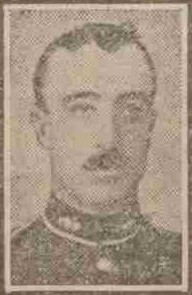 Pte. James Cavin, Royal Scots Fusiliers, whose sister resides at 34 Dallfield Walk, was a reservist.  He was 45 years of age, and on the outbreak of war was called to the colours.  He had been in France two years.  Prior to enlistment, Pte. Cavin was employed for six years in a rubber work in America, but came home just before the outbreak of hostilities.  A brother Private Thomas Cavin, is serving in Salonika, while another brother has been discharged.

Can you tell us more about James Cavin'? Some additional facts, a small story handed down through the family or perhaps a picture or an heirloom you can share online. Contact our curator...