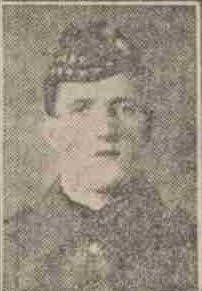 Duncan has no known grave but is remembered on the Le Touret Memorial.

Private Duncan Chalmers, of the Royal Scots Fusiliers, a youthful Dundee soldier whose home was at 17 Lawson Place, has been killed on the battlefield in Northern France.

The sad news was received by Private Chalmers’ parents yesterday.

Private Chalmers had sent word to his relatives regularly until four weeks ago, and consequently considerable anxiety was felt by those who were dearest to him.

From an early age Private Chalmers had a strong inclination for a soldier’s life.  He was a member of the Boy’s Brigade, a Boy Scout, and, before joining the Regular Army a Territorial.

Private Chalmers was killed on 18th October, and was just about twenty years of age.  He was the youngest son of Mr James Chalmers.  Before entering the army Pte. Chalmers was employed as a calender worker with J. & A. D. Grimmond, Ltd.

Can you tell us more about Duncan Chalmers'? Some additional facts, a small story handed down through the family or perhaps a picture or an heirloom you can share online. Contact our curator...