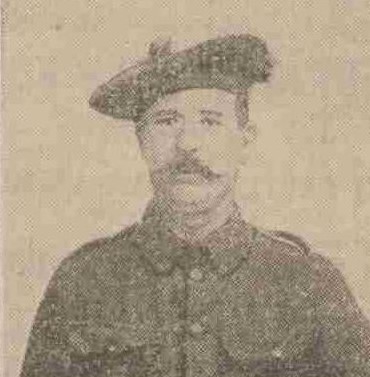 Private James Chalmers, of the Black Watch, a Dundee man, has fallen on the battlefield.

One of the officers of the deceased soldier’s company writes home as follows :–“The company were holding a piece of line where the war is at its fiercest, and one of the endless shells fell quite close to Private Chalmers, and killed him at once.”

Private Chalmers who was 38 years of age, was married, and is survived by a widow and eight children, who reside at 10 Court Street, Dundee.  He enlisted in April, 1915, and had been at the front for a considerable time.  In civil life Private Chalmers was employed as a carter with Mr D. Horsburgh, contractor, Dundee.

Can you tell us more about James Chalmers'? Some additional facts, a small story handed down through the family or perhaps a picture or an heirloom you can share online. Contact our curator...