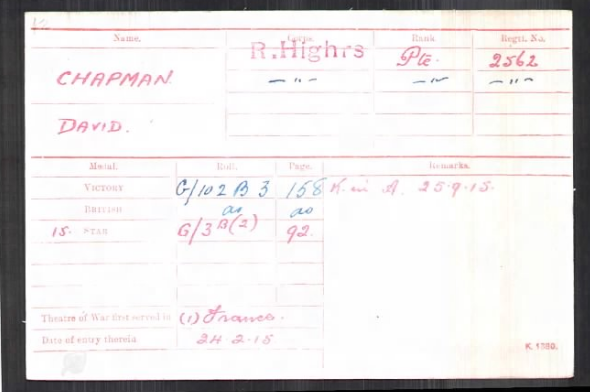 Lance-Corporal David Chapman, of the 1/4th Black Watch, whose death in action has been announced, was the second son of Mr James Chapman, confectioner, Forfar, late of Dundee and Wormit, where the family is well known.  The lance-corporal was employed as a clerk with the firm of Messrs George Duncan & Company, Commercial Street, and shortly after the outbreak of war joined Dundee’s own.  He was 26 years of age, and was in anticipation of a commission in the 3/4th Black Watch.

HOW LANCE-CORPORAL CHAPMAN WAS KILLED.

The report recently published that Lance-Corporal David Chapman, of the 1/4th Black Watch, younger surviving son of Mr James Chapman, confectioner, Forfar, and formerly of Dundee, had been killed at the front has now been practically confirmed by communications that Mr Chapman has received from Major Rogers and a comrade of his son.

Major Rogers states that he knew Lance-Corporal Chapman well, and could speak in the highest terms of him both as a soldier and a man.

Lance-Corporal C. S. M’Crirrick, of the 4th, a comrade of the deceased, states that Chapman was killed about eighty yards from the British trench.

Before he enlisted Lance-Corporal Chapman was employed as a clerk with Messrs Robertson, Ireland & Co., Dundee. He was 26 years of age.

Can you tell us more about David Henderson Chapman'? Some additional facts, a small story handed down through the family or perhaps a picture or an heirloom you can share online. Contact our curator...