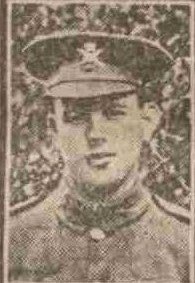 Alfred has no known grave but is remembered on the Cambrai Memorial.

Gunner Alfred Clark, Tank Corps, who was reported missing on the 20th November, is now officially reported to have been killed on that date.  Gunner Clark was 26 years of age, and his wife resides at 11 Cochrane Street.  He was formerly employed in East Port Calender.  Enlisting in the Machine Gun Corps in 1915, he was subsequently transferred to the Tank Corps.  Deceased was a son of Mrs Clark, 8 Blinshall Street, and three of his brothers are on military service—John in the Machine Gun Corps, David in the Royal Scots, and William in the Gordon Highlanders.

Can you tell us more about Alfred Clark'? Some additional facts, a small story handed down through the family or perhaps a picture or an heirloom you can share online. Contact our curator...