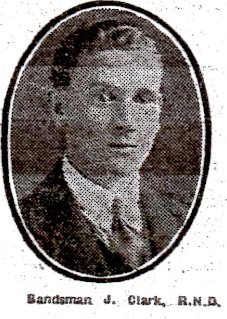 Bandsman John Clark,  Hood Battalion R.N.V.R., has died of wounds received in action.  He is the younger son of Mr and Mrs William Clark, 14 Annfield Street, Dundee.  Twenty-one years of age, the deceased bandsman, who was a member of the Reserve for a considerable time went on active service with his battalion not long after hostilities commenced.  He saw much fighting at Gallipoli, and was also present at the siege of Antwerp.  His brother, a private in the Scots Guards, was killed earlier in the war.  Bandsman Clark was previously an apprentice painter with Mr Morrison, Perth Road, Dundee.

John`s father, William, was a Mercantile clerk and the family lived at 10 Balfour Street and then 12 Annfield Street, Dundee. John`s elder brother, William, fought with the 19th Battalion, Canadian Infantry after enlisting in March 1916, and survived the war. His younger brother, Robert,of the 1st Scots Guards, was killed in action on 22nd December 1914 in France.

John was a member of the pre war RNVR Unicorn band. He served at Antwerp and then Gallipoli where he contracted jaundice and dysentery and was evacuated to hospital in Cairo. On rejoining the Battalion in France as a stretcher bearer he was wounded in the assault on Beaucourt during the Battle of the Somme and died of his wounds on 19th October 1916.

Can you tell us more about John Clark'? Some additional facts, a small story handed down through the family or perhaps a picture or an heirloom you can share online. Contact our curator...