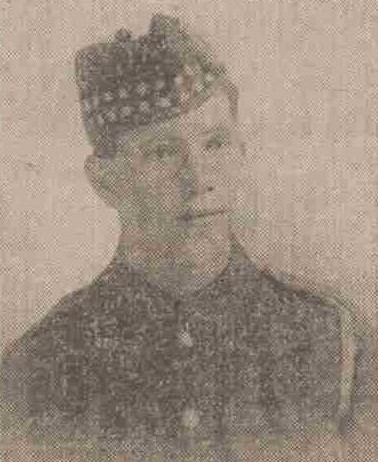 TO FATHER OF DUNDEE ROYAL SCOT.

A letter has been received by Mr John Cleghorn, 27 Victoria Road, Dundee, from the Chaplain of the 2nd Royal Scots regarding the death in action of his son.  Private John Cleghorn, who was a member of that battalion.

Private Cleghorn, who was 22 years of age, enlisted in January last, and went to the front with the battalion in May. His abilities as a crack shot were soon realised, and about a month ago he was appointed a sniper.  The chaplain describes how he met his death.

“I am sorry to have to give you bad news.  The battalion was in the trenches, and Private J. Cleghorn was with them.  He was a sniper, and evidently the Germans had marked his post, for he was struck by a bullet.  He was hit in the head, and rendered immediately unconscious.  He never regained consciousness, and died in a few hours in the battalion dressing station.  I was in the trenches shortly afterwards, and we chose a grave for him behind the lines.  He was reverently laid to rest there at four o’clock in the afternoon.  His comrades ask me to convey to you their deep regret and respectful sympathy.

“He has given all he could, his life, and surely he will have heard the ‘Well done, good and faithful servant,’ of the saviour.”

Previous to joining the army Private Cleghorn was employed with Messrs Burns & Harris, Dundee, as an apprentice bookbinder.

Can you tell us more about John Cleghorn'? Some additional facts, a small story handed down through the family or perhaps a picture or an heirloom you can share online. Contact our curator...