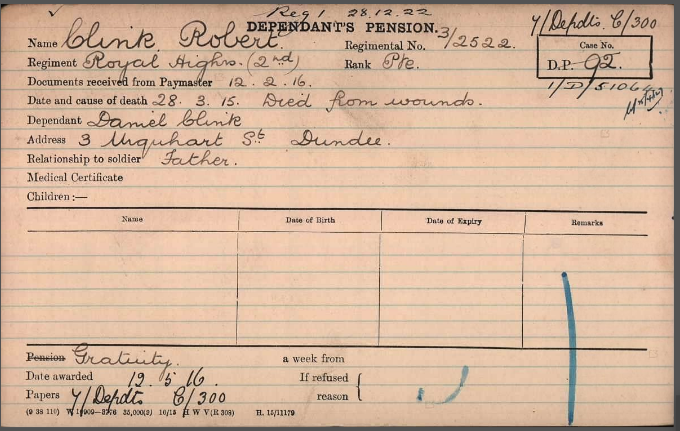 Robert is the brother of Pte John Clink, 3/1899, 1st Battalion Black Watch, who was killed in action 25.06.1917. and Pte Daniel Clink, 7385, 2nd Battalion Argyll & Sutherland Highlanders who was invalided back home but survived the war and Cpl William Clink, P13186, Military Foot Police.

THREE DUNDEE BROTHERS AT THE FRONT.

YOUNGEST DIES OF WOUNDS AND ELDEST IS INVALIDED HOME.

Dundee is rich in patriotic families, and the record of the sons of Mr Daniel Clink, 3 Urquhart Street, is one to be proud of.

The army claimed three of Mr Clink’s boys, Private Robt. Clink (19), 3rd Black Watch, died on 28th March of wounds received in action ; Private John Clink (22), also of the 3rd Black Watch, is in France fighting with the 1st Battalion of his gallant regiment ; and Private Daniel Clink (35), 2nd Argyll and Sutherland Highlanders, was invalided home from Armentieres with a badly twisted ankle and rheumatic.

The chaplain attached to the 1st Seaforth Highlanders wrote to Mr Clink under date 29th March informing him of the death of his son Robert.  The letter says :__”It is with very deep sympathy and sorrow that I write to tell you of the death through wounds received in action of your son.  He was brought into field ambulance early in the morning wounded by a bullet in the shoulder.  He died after being brought in, and is buried in a little cemetery near others of his corps.  It will comfort you to know that we were able to pay this mark of respect and honour to him.  The 2nd Battalion has been bearing its share of the work and the losses of this campaign.  I know how deep will be the grief with which you hear of your son’s death, but I am sure there will be always be pride mingled with the memories of him___pride in how he bore his part and died for his people.”

Mr Clink has received the formal notice from the War Office confirming the chaplain’s intimation.

Private Robert Clink saw only eleven months’ service with the “Forty-Second.”  He was transferred to France on September 3 and attached to the 2nd Battalion, which operates with the Indian Expeditionary Force.  Before he enlisted, he was employed as a jute preparer in Queen Victoria Works.

Can you tell us more about Robert Clink'? Some additional facts, a small story handed down through the family or perhaps a picture or an heirloom you can share online. Contact our curator...