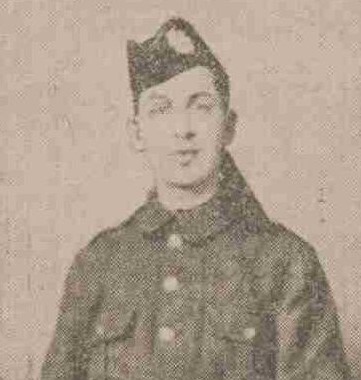 Lewis enlisted with the 16th Battalion (2nd Glasgow) Highland Light Infantry. He served on the Western front and was wounded in the left forearm sometime in  February 1916. He was then evacuated back to Glasgow but died there from Tetanus following an operation.

DURING BOMBARDMENT OF DUG-OUT.

Private Lewis Cohen, 16th H.L.I. has been wounded during the bombardment of his dug-out by the enemy.

The information was conveyed to his father, Mr J. Herbert Cohen, jeweller, 143 Nethergate, Dundee, whose place of business is in the Overgate, in a letter from Lieutenant S. Brown, in which the officer pays a splendid tribute to the courage of Private Cohen.

The letter, which is dated 18th February says :–“It is with sincere regret that I have to inform you that your son was wounded last Monday.  He is one of the company signallers, and their dug-out was blown in by a high-explosive shell.  All the occupants got clear with most of their instruments.  Some things, however, were missing, and your son went back to the dug-out to recover them.  It was when coming out that another shell burst on the dug-out, and Lewis came running across the road holding his arm.

“His arm was soon dressed, and he was carried down to battalion headquarters.  He preferred walking to a stretcher, and the doctor examined his arm, and applied another dressing.  He was taken to the advanced dressing station.”

The letter continues :–“From the first day I liked him.  His work was excellent, and he never ‘groused.’  His humorous touches when the boys were tired and ’fed up’ helped me tremendously.  Since coming out here to the real business his popularity has increased tenfold, and every man in the company was really sorry to hear he had been wounded.”

Private Cohen is 21 years of age, and was employed as a clerk with Messrs W. B. Dickie & Sons, solicitors.  He left Dundee for Glasgow, and was not long in the latter city when he enlisted, shortly after the outbreak of war.

Private Lewis Magnus Cohen, of the Highland Light Infantry, who has died in Stobhill Hospital from wounds received in action on 14th February, was the second son of Mr J. Herbert Cohen, jeweller, 143 Nethergate, Dundee.  Private Cohen sustained his wounds as the result of a gallant action when the dug-out of the company signallers, of whom he was one, was blown up by a high explosive shell.   All the occupants got clear with most of their instruments, but some things were missing, and Private Cohen went back to the dug-out to recover them.  While he was coming out another shell burst on the dug-out.  Twenty-two years of age, Private Cohen was formerly in the office of Messrs W. B. Dickie & Sons, solicitors, Dundee, but was employed in Glasgow, when he enlisted shortly after the outbreak of war.

Can you tell us more about Lewis Magnus Cohen'? Some additional facts, a small story handed down through the family or perhaps a picture or an heirloom you can share online. Contact our curator...