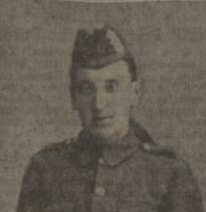 “Your husband has given his life for a great cause—for the freedom of his country—and no man can do more.”

In these fateful words Mrs Coleman, 89 Hospital Wynd, Dundee, was informed yesterday of the death in action of her husband, Private Hugh Coleman, of the Black Watch.

Private Coleman was killed by a stray rifle bullet on the morning of the 3rd inst.  At the time he was filling up some shell holes in front of the parapet.

The deceased soldier was very popular among his comrades.  Lieutenant Wilkie, in a letter to Mrs Coleman, says of him:–“He was one of the very best men in my platoon, and personally I liked him very much indeed.  He was also very much liked by the officer commanding the company, Captain Cunningham, and by all the n.c.o.s and men.”

Private Coleman was 28 years of age. He had been at the front for nine months, and was home on leave only five weeks ago.  Before he joined the army he was employed as a jute preparer in Bowbridge Works.  He leaves a widow and a girl of two years, for whom much sympathy is felt in their great loss.

Can you tell us more about Hugh Coleman'? Some additional facts, a small story handed down through the family or perhaps a picture or an heirloom you can share online. Contact our curator...