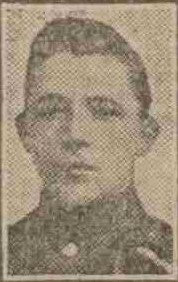 John has no known grave but is remembered on the Tyne Cot Memorial.

Intimation has been received by Mr P. Coleman, fruiter, 204 Blackness Road, Dundee, that his son, Bombardier John Coleman, R.F.A., had been killed in action on 8th October. Deceased who was 19 years of age, joined up on 2nd October of last year, and had been 6½ months at the front.  He was a butcher to trade, and served his apprenticeship with Mr David Webster, Blackness Road.  An officer writing to his parents says that “Bombardier Coleman was a gallant soldier and most courageous under the most trying conditions.  He was instantaneously killed at his gun.”

Can you tell us more about John Coleman'? Some additional facts, a small story handed down through the family or perhaps a picture or an heirloom you can share online. Contact our curator...