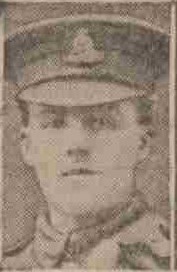 This man is also listed on S.D.G.W. and the Scottish National War Memorial with the Regimental No 1519.

Intimation in the form of a letter from an officer at the front has been received by Mrs Colligan, 27 Lyon Street, Dundee, of the death from wounds of her son, Gunner John Colligan, R.F.A.  The writer says that Gunner Colligan was one of the best gunners in his section, and that his name had been forwarded some time ago by the General for recommendation for some reward for conspicuous bravery and devotion to duty when he assisted his corporal to carry an unconscious man away from his gun after it had been hit directly by a gas shell.

Gunner Colligan was the eldest son of Mr and Mrs Charles Colligan.  He was previously in the employment of Mr Scrimgeour, wholesale grocer, Dundee. Mrs Colligan has other two sons in the army.

Can you tell us more about John Colligan'? Some additional facts, a small story handed down through the family or perhaps a picture or an heirloom you can share online. Contact our curator...