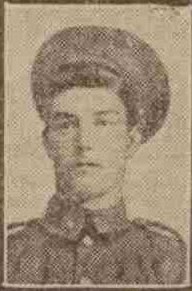 Sapper David Colliston, Royal Engineers, whose death from pneumonia took place in a hospital in France on 21st October, was a son of Mr Wm. Colliston, 138 Alexander Street, Dundee.  Sapper Colliston had been in the army for seven years, and had served for four years in France. Deceased who was 29 years of age, leaves a widow and one child, who reside at 3 Glamis Street, Dundee.  Mr Colliston has another son, Driver John Colliston, R.E., who has also been at the front for four years.

Can you tell us more about David Colliston'? Some additional facts, a small story handed down through the family or perhaps a picture or an heirloom you can share online. Contact our curator...