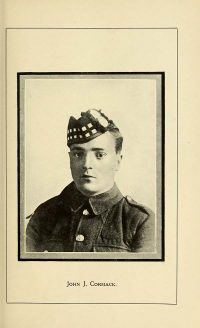 His siblings were David, Alfred, William and Elizabeth.

John had the misfortune to lose his father when he was only five years old. He was brought up and educated in Donaldson’s Hospital, Edinburgh, from his eighth until his four­teenth year, when he returned to Dundee to be with his mother. He went to work, first as lodge boy with Baxter Brothers & Co., Ltd., then as lift boy with Smith Brothers. Lastly, on 13 November 1911, he began to serve an apprenticeship to the printing trade with Caxton House.

John was described as “a boy of a likeable disposition, happy and good and kindly in all his ways”. He liked his work, hoped he would become the support of his mother and sister. He had three brothers, but one had removed to Cowdenbeath, and two had emigrated.

The war broke out, and after seeing a recruitment poster representing a German soldier with his iron foot upon an infant, and a tartan-kilted soldier protecting a woman, he went straight home and told his mother that he would need to leave her.

On his nineteenth birthday, the 26 January 1915, John Cormack left home to enter the ranks of the Royal Scots Fusiliers, in Kitchener’s Army. Ayr was his first destination, but he was quartered there for one night only. Next day he was transferred to Greenock, where he received his army training, and where he greatly enjoyed the open-air life, the healthy exercise, and the happy comradeship.

One day there came from John the ominous news that he had been picked for a draft. There was no time for “draft leave” in these hurried days, and his last farewell was a postcard to his mother, “Good-bye, mother; I’m coming back. Keep up!”

Then there came letters from France from time to time, but as the soldiers were forbidden to give any information as to where they were located or what they were doing, John’s letters to his mother and to his friends were necessarily uninteresting.

John was reported as missing on 26 September 1915, age 19, during the Battle of Loos and is commemorated on the Loos Memorial.

John joined me at Bethune. He was in my platoon and I knew him well. I saw him go over the parapet of his own accord. He did this once before. He just walked straight over. He was very game, and was determined to do something. He once led a platoon over. The second time he went out by himself. He was half-way to the German trench when he was killed instantaneously by a bullet through the head.

Can you tell us more about John James Cormack'? Some additional facts, a small story handed down through the family or perhaps a picture or an heirloom you can share online. Contact our curator...