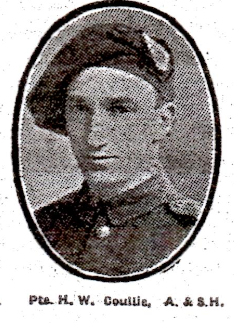 Mrs David Coullie, Inverleith, Whinny Brae, Broughty Ferry, was informed yesterday that her son, Private Herbert Coullie, Argyll and Sutherland Highlanders, was killed in action on July 23.  A comrade writing to the bereaved parent, states that Private Coullie was of a cheery disposition, well liked by all, and as a soldier was thoroughly reliable.  He had only rejoined his regiment after being gassed.  Private Coullie enlisted in the Sportsmen’s Battalion in August, 1915, and was 22 years of age.  In civil life he was a linotype operator on the “Courier.” And was highly esteemed by all who knew him.  A powerful swimmer, Pte. Coullie performed a gallant rescue in the Tay a few years ago.  His elder brother, Walter, joined the Royal Air Force a week ago.

Can you tell us more about Herbert Watson Coullie'? Some additional facts, a small story handed down through the family or perhaps a picture or an heirloom you can share online. Contact our curator...