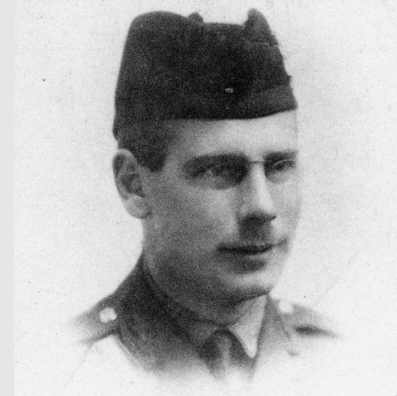 Captain Charles Miller Couper was the Officer Commanding D Company of 1/4 Bn Black Watch during the battalion’s fateful attack in support of the Battle of Loos in 1915 The Battalion, as part of the Meerut Division of the Indian Corps, were part of a diversionary attack on Aubers Ridge area to the North of La Bassee and North of the main Loos battle area. Their role was to attack the ridge in the area of Pietre , keeping Germany forces occupied thus preventing them from reinforcing the Loos area . although they made good progress to their objectives the battalion flanks were exposed to heavy fire and they suffered accordingly Some 230 men and 19 officers were casualties including Captain Couper. The wounds he suffered that day, (25/9/15), were such that he succumbed to them on 28th Sept whilst a prisoner of the Germans. He was 25 Years old and the son of Catherine and John Couper of Dundee.

Captain C. M. Couper is a son of the late Mr John Couper, jute merchant, Dundee, and is an enthusiastic Territorial officer.  He had been for years in the 4th Black Watch, and was promoted to company rank shortly before going to the front.  He is in the service of the Scottish American Trust Companies.

Captain Charles Miller Couper, 4th Black Watch, died from wounds in a German field hospital at Sainghin on September 28.  He was wounded and taken prisoner on September 25.  The deceased officer, who was in his 26th year, was a son of the late Mr John Couper, jute merchant, Westdene, Dundee.  He had been connected with the 4th Black Watch for a considerable time, and was promoted to company rank shortly before going to the front. Captain Couper was in the service of the Scottish American Trust Company, Meadowside.

Can you tell us more about Charles Miller Couper'? Some additional facts, a small story handed down through the family or perhaps a picture or an heirloom you can share online. Contact our curator...