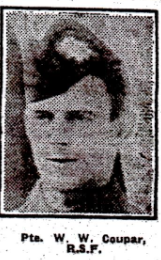 William has no known grave but is remembered on the Tyne Cot Memorial.

Official intimation has been received by Mr and Mrs John Coupar, 23 Wolseley Street, Dundee, of the death in action of their son Private William W. Coupar, Royal Scots Fusiliers.  Private Coupar was twenty-six years of age, and had been in France since October, 1916.  Previous to the outbreak of hostilities he was in the employment of the Eastern Co-Operative Society.

Deceased was an ex-member of the 22nd Boy’s Brigade (Trinity C.U. Church).  His brother, David, who is a gunner in the R.G.A., is at present recuperating from wounds received in France some time ago.

Can you tell us more about William Watson Coupar'? Some additional facts, a small story handed down through the family or perhaps a picture or an heirloom you can share online. Contact our curator...