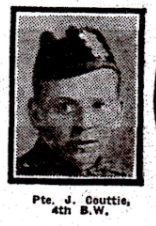 Private James Couttie, a Dundee Black Watch soldier, has had a trying time.  His wife, who resides at 14 Henderson’s Wynd, received official intimation that he was lying dangerously ill in France with wounds in the thigh, while she has been informed by the matron of the hospital that her husband has had to have the injured leg amputated, although the doctor did his very best to save the limb.

A chaplain, in a letter to Mrs Couttie, remarks that it is a wonder her husband has survived at all.  After sustaining a compound fracture of the thigh, he lay for three days and nights before he was brought in.

Private James Couttie, Black Watch, was reported in the “Courier” yesterday as having been dangerously wounded, but intimation has now been received by telegram that he has succumbed to his injuries.  Private Couttie lay for three days and nights after being wounded before he was brought in.  He leaves a young widow and two children, who reside at 14 Henderson’s Wynd.

Can you tell us more about James Couttie'? Some additional facts, a small story handed down through the family or perhaps a picture or an heirloom you can share online. Contact our curator...