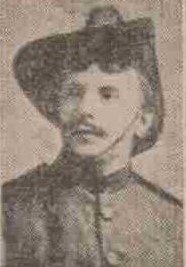 What is the fate of Corporal James Cox, 1st Black Watch?  Mrs Cox, who resides at 3 Thorter Row, Dundee, some time ago received information that he had been killed.  She sent the letter, which came from a captain, to the War Office, and on Saturday received intimation from the Record Office, Perth, that her husband is missing.

Corporal Cox, who is 41 years of age, went through the South African War.  His time having expired, he enlisted in his former regiment at the outbreak of war, and has been in France for about eleven months.

He was formerly employed in the Caledon Shipyard.

Corporal J. M. Cox, of the Black Watch, who was reported missing a year ago, is now officially reported as having been killed at that time.

Corporal Cox saw service in the Boer War.  On the outbreak of war, he was in the National Reserve, and volunteered for active service.  Deceased had been at the front for about a year.  He leaves a widow and three children, who reside at 9 Logie Street, Lochee.

Can you tell us more about James McGregor Cox'? Some additional facts, a small story handed down through the family or perhaps a picture or an heirloom you can share online. Contact our curator...