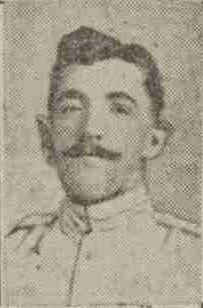 Thomas has no known grave but is remembered on the Le Touret Memorial. He was the brother of Pte William Cox 12269, 2nd Battalion Highland Light Infantry, who was killed in action 17.05.1915.

The intimation states that Pte. Cox was posted as “missing” on 9th inst., and attached is a printed message which reads :–“The term “missing” does not necessarily mean that the soldier is killed or wounded.  He may be an unwounded prisoner of war or temporarily separated from his regiment.”

Pte. Cox is 25 years of age and travelled to France with his regiment from India.  His brother, Pte. Wm. Cox is at the front with the 2d Highland Light Infantry.

DUNDEE SOLDIER WHO WAS REPORTED MISSING

IS NOW BELIEVED TO BE KILLED.

Private Thomas Cox, 2d Black Watch, who was posted as missing on 9th May, is now believed to have been killed.

His relatives, who reside at 47 Carnegie Street, Dundee, received a letter to this effect from the chaplain of the Black Watch yesterday.  Deceased, who was 25 years of age, had been four years with the colours, three and a half of which were served in India.  Previous to enlistment he was employed at Caldrum Works.  He had been at the front for nine months.  Another brother, Private William Cox, of the H.L.I., has been in the firing line for seven months.

Can you tell us more about Thomas Cox'? Some additional facts, a small story handed down through the family or perhaps a picture or an heirloom you can share online. Contact our curator...