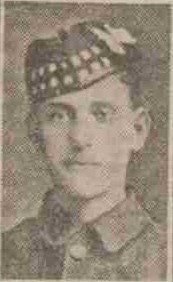 Andrew has no known grave but is remembered on the Arras Memorial.

Mr James Craig, 21 Glamis Street, Dundee, has received official intimation that the youngest of his four sons serving with the colours, Private Andrew Craig, Royal Scots, has been killed in action.  Deceased, who was 19 years of age, enlisted towards the end of 1915, and had been at the front since April of last year.  Previous to joining he was employed in Hillbank Linen Works.  Mr Craig himself holds the Long Service Volunteer Medal.

Can you tell us more about Andrew Craig? Some additional facts, a small story handed down through the family or perhaps a picture or an heirloom you can share online. Contact our curator...