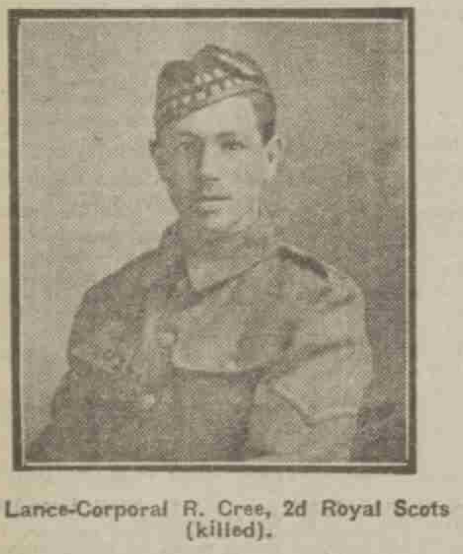 Grandson of Mrs E. Cree, 184 Hilltown, Dundee. Robert has no known grave but is remembered on the Menin Gate Memorial.

What has been the fate of Private Robert Cree, of the Royal Scots?  He is posted as “missing.”  Cree, who was an enthusiastic soldier, had been attached to the Royal Scots for two years, and, returning after a holiday at Christmas, he was promoted to be a drummer.  Mr Robert Cree, 184 Hilltown, Dundee, grandfather of the young soldier, has received official intimation that Robert was reported as missing after an engagement on 26th August.

Can you tell us more about Robert Cree'? Some additional facts, a small story handed down through the family or perhaps a picture or an heirloom you can share online. Contact our curator...