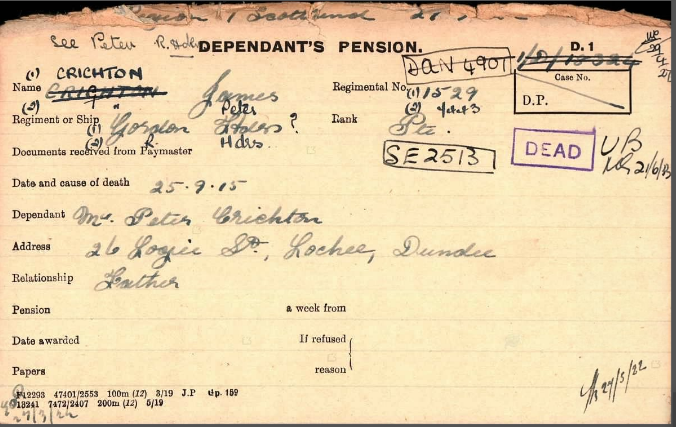 TWO OUT OF THREE LOCHEE BROTHERS

MEET DEATH AT THE FRONT.

Mr Peter Crichton, 26 Logie Street, Lochee, has just had intimation of the death in action of his youngest son, Private James Crichton, of the 8th Gordon Highlanders, This is the second of his three soldier sons who have made the great sacrifice, the eldest son, Private Peter Crichton, 2d Black Watch, having been killed at La Bassee on 25th January.  The third of the patriotic brothers is Alfred (23), who is serving as a driver in the 205th (Dundee) Field Company Royal Engineers.

Twenty years of age, James enlisted immediately after war broke out, and was formerly employed as an apprentice gardener at Ardler.  Peter, who was a reservist, was employed in Melbourne, when he received the call to come home.

Can you tell us more about James Crichton'? Some additional facts, a small story handed down through the family or perhaps a picture or an heirloom you can share online. Contact our curator...