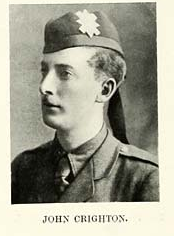 Lieutenant Crighton served for four years with the 4th (TF) Black Watch, attaining the rank of sergeant, and when a student at University College, Dundee, was a member of the Officers’ training Corps. He also took a, deep interest in the Boys’ Brigade and gave devoted service as an officer in the 10th (Wallacetown Parish Church) Company, which has commemorated his service by a tablet in the church. Gazetted in September 1914, he was promoted in January 1915. Latterly he held the very responsible post of bombing officer for the 44th Infantry Brigade.

The first Dundee officer of the 9th Black Watch to fall in action is Lieutenant John Crighton, of Messrs J. Crighton & Son, plumbers, Cowgate, Dundee, and who resides at Lammerton Terrace.  His parents have received an official wire intimating his death.

Lieut. Crighton, who was 23 years of age, received his commission on 1st September, and was promoted lieutenant in January of this year.  The deceased officer, after being educated at Morgan Academy, served his apprenticeship in the Caledon Company’s Engineering Works at Lilybank, and latterly passed into the drawing office. He passed on to University Collage as an engineering student, and had just completed his first course when war broke out.  Lieut. Crighton was a member of the Officers’ Training Corps, and also served five years in the 4th Black Watch, and had reached the rank of sergeant when his period expired.  He took a keen interest in the Boys’ Brigade, and was an officer in the Wallacetown Parish Company.

At the forenoon service in Wallacetown Church yesterday the Rev. J. S. Robertson made sympathetic reference to the deaths of Lieut. Crighton and Private Millar, who was killed at the Dardanelles.  We cannot doubt, he added, that very soon we shall hear of many more.

Mr Crighton’s second son, Alexander recently joined the Royal Naval Division, and is at present in training in the South.

Can you tell us more about John Crighton'? Some additional facts, a small story handed down through the family or perhaps a picture or an heirloom you can share online. Contact our curator...